skip to main | skip to sidebar

When the Arrogant One looks out from behind his teleprompter, all his mind processes is a view of a room full of uninformed dunces, who just need his wisdom.

Honestly, he is a sad man. So full of potential yet how many times have we seen folks who have all the potential in the world but who think they know it all. When you think you know it all and you stop learning, then trouble lies ahead.

Posted by American Yankee at 7:54 AM 6 comments:

Do Ya Miss Him Yet?

George Bush courageously led the country when it was on its knees after 9/11...Obama and his marxist minions intend to put the country back on its knees and keep it there
Posted by American Yankee at 5:29 AM 7 comments:

Most of us already know 90% of the national democrat leaders are the devil’s spawn (or Castro’s)…either works.
Modern liberalism is a mental disorder that uses distractions, lies and smears to sell secular socialism.
You think that is extreme to say? So did I…about 5 years ago…no longer….if 2009 can’t convince you with Obama, Pelosi and Reid’s 13 trillion in new debt insanity, yada yada….maybe socialized medicine will.
Hate to be too obvious here, but The Obama Mob is nothing but Chicago politics .

If you try to fight the Mob for common sense solutions, you soon sleep with the fishes.

Makes for great theater, tho. But we all know how the story ends ...
Posted by American Yankee at 5:23 AM 5 comments:

Keep to the Facts!

Okay, fact is Obama has surrounded himself with people like the self avowed communist Van Jones, Anita Dunn and Valerie Jarrett who believe that Chairman Mao was the cat's meow in fact they even put a Christmas ornament with this picture on their Christmas tree, people like Hugo Chavez and Castro are right in line with their ideology. From the time Obama was a little boy he has been surrounded by people who hate everything that America ever stood for especially the founding principles, people like Mark Davis Wilson his boyhood mentor and radical criminals bombers like Bill Ayers and his outfit, racist preacher Rev. Wright etc. etc. etc.

I'm sorry but the Facts are the Facts!

Another fact, the American people didn't know anything about this guy when they voted for him the media failed miserably in objectively vetting this guy but instead became his cheer leading squad and the result was the American people got a warm and fuzzy relief from their self perceived white guilt being totally taken in by a charismatic empty suit with promises of hope and change that were never explicit so they bought a pig in a poke and the Marxist to boot.

They're spending millions to keep Obama's records secret, why? The short answer is there is something there they don't want the people to know, but if you got in your car one morning and it smelled like rotten fish would you keep driving or look under the seat?

Michelle Obama was never proud of America until her husband won his candidacy for President. This places her square in the Blame America First crowd. She also makes vague references to "hope" and "change" and "moving in that direction" and unifying around certain issues.

Rev. Jeremiah Wright, the President's pastor for 20 years, whose disdain for America, or at least certain parts of it , calling her all the disgusting things that he did!Wright also slammed Hillary Clinton, categorizing her as a "rich white person" who "ain't never been called a n-----" . Further, he reveals his disappointment but not his surprise at the President's refusal to speak with him, blaming "them Jews" for this decision.
Bottom line: Wright connects racism, antisemitism, and hatred for America with the President.

Posted by American Yankee at 8:52 AM 8 comments:

Maybe there'll some more good news today...there's a chance that thousands more can lose their jobs. I wonder, if this happens...will Obama take time off from laserin' in on Jobs and throw another celebration, invite the Colt-44 brutha's into the Oval Office for a sip'n'smoke and hoop it up for some more picture Ops?
Posted by American Yankee at 8:30 AM No comments:

Would You Invite Any Of These People To YOUR Thanksgiving Dinner? 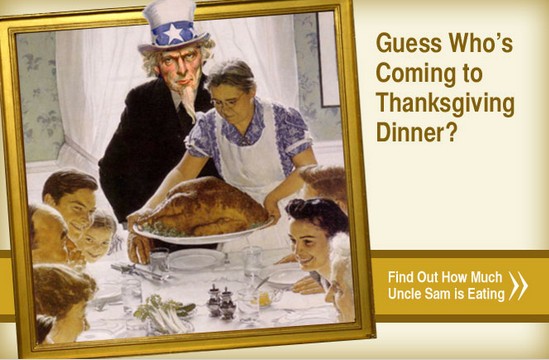 Joe Biden is proof positive that intelligence is not necessarily a pre-requisite for a political career.

Former Vice President Dick Cheney Sunday shot back directly at Vice President Joe Biden’s assertion that success in Iraq will be one of the Obama administration’s great achievements, calling it “a little strange.”

Chuckling after he was read Biden’s statement, Cheney said, “I guess I shouldn’t be surprised by my friend Joe Biden.”

“I’m glad he now believes Iraq is a success,” Cheney said on ABC's "This Week," adding that Biden and President Obama campaigned criticizing the Bush administration on Iraq and opposed the surge. “For them to try and take credit for what happened in Iraq strikes me as a little strange," Cheney said.

If the Obama administration is going to take credit for the draw down of troops and democratic government in Iraq, Cheney said, it should come with “a healthy dose of thank you George Bush,” because those changes are “in accordance to the timetable that we initiated.”

Cheney, responding to Biden's comments in an interview on NBC's “Meet the Press” taped Saturday, said his replacement as vice president was “dead wrong” to say another terrorist attack on the scale of 9/11 is unlikely.

A nuclear attack, or one similar to 9/11, is “the biggest strategic threat” facing the United States, Cheney said.
Cheney continues to show he can out think, out talk, and outclass any pathetic smear thrown at him by Obama or Joe Biden. It's so refreshing to hear an adult speak.
The clueless Obama crew is beneath contempt.
Cheney has fought many political battles, but the one to keep Obama from totally killing our security may be the most important.
In a sane world, Dick Cheney would be president of the U.S., not the Zero, Barack Obama
Posted by American Yankee at 10:54 AM 5 comments:

Older Posts Home
Subscribe to: Posts (Atom)
Everybody Is Entitled To Agree With My Opinion

American Yankee
I've enjoyed my career as an artist for about 30 years. I have many interests and love to challenge myself by exploring new things. I try to be "creatively generous" with what I learn. While I appreciate all the disciplines of the "serious side" of Fine Arts, I also enjoy creating things that make people think.